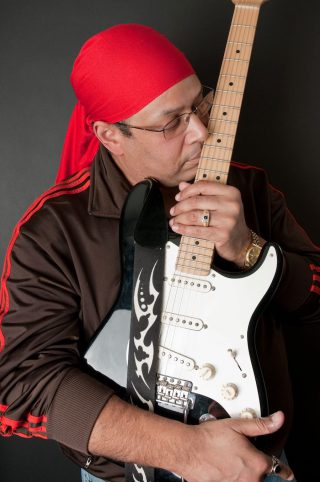 André is proud to be a part of “Queen Esther Marrow and The Harlem Gospel Singers” band .  He considers it an honor to work with a woman who has helped set the path for American music as we know it today and takes responsibility very seriously.

A host of styles are in André’s arsenal from Rock, Reggae, Rhythm and Blues, and all styles in between.  He has toured with Epic recording artist Eye and I and has been the opening act for Billy Bragg, Ice T, Greg Lassalle (a cousin who is a talented musician from Toronto) and Ziggy Marley.

Wayne Kounty of Warner Bros. Records also features André on its recent recording Fantasy World. André and Tony Humphries (a world renowned Mix DJ) has recorded in the past and is currently working on new projects that will bring in new avenues of experimentation and sound one of those projects is a re-mix of “But Beautiful” featuring Billie Holiday for Sony Legacy Records.

André plays shows regularly with Chauncey Nedd whom he has had a 20 year affiliation with. The song “Take You Away” from the Wayne Kounty CD is currently on the movie soundtrack “PUSH” airing on Showtime. “I am proud to be joined by my Godmother the beautiful lady Sherry Scott who is the original singer for Earth, Wind and Fire whose spirit is clear like water and beauty of the sky.”