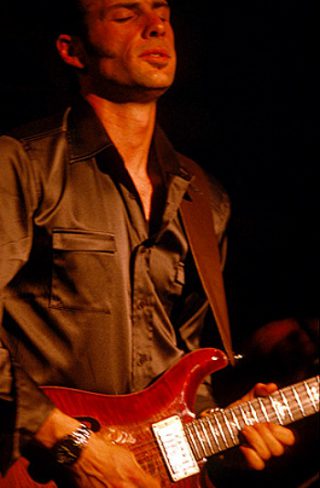 Thom Loubet started playing at the age of six on a guitar made by his father Jeff. He took private lessons in Albuquerque, New Mexico with the venerable Lewis Winn at twelve and still meets with him whenever he’s in town. He spent his youth playing the blues in the clubs of Albuquerque, often in his father’s band.

Loubet left Albuquerque for Wesleyan University where he majored in music and studied jazz with Anthony Braxton, Jay Hoggard, and Tony Lombardozzi. In 1995 he made his first commercial recording as part of the Braxton’s ensemble on Composition 102. He graduated in 1996 with High Honors in Music and the Leavell Prize for outstanding work as a Music Major.

In 1997 he moved to New York and became involved in the underground soul scene with some of the city’s greatest divas including Tamar-Kali, Danni Gee and SugaBush, Miriam Sullivan, Omo Misha, Imani Uzuri, M’B Singley, Monet, Lisala Beatty, and Soyini Assata, just to name a few.

In 2002,  he formed The Citizens , an Avant-Rock band, with Mark Lesseraux. (Burnt Sugar’s Jason DiMatteo is also a member)

In 2006, he began touring internationally with Sony/Epic recording artist Alice Smith, and has done so extensively ever since.