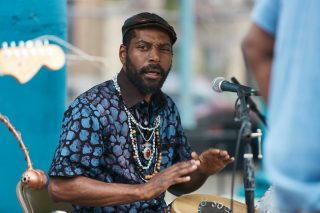 Shawn Banks is a percussionist living and teaching in Brooklyn, New York.

He began to explore the world of percussion after being introduced to African drumming and the rhythms of West Africa at a young age. Many have welcomed Shawn to the bandstand, appearing at New York City’s Blue Note, the Apollo Theater, S.O.B.’s, Central Park’s SummerStage, Lincoln Center, and many other venues within and without New York City.

After many years of teaching and playing music, Shawn is developing a children’s African drumming and music appreciation curriculum and arts program, BEAT CAMP Edutanment. He is composing music and a storybook for its upcoming launch. Also, a collaborative funk-soul project under his direction called People United For Funk, is now in the works and underway.