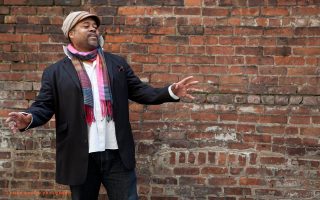 Greg Tate was a writer and musician living in Harlem. A founding member of the Black Rock Coalition, Tate played  guitar and co-led the BRC affiliate band Women In Love which included future Burnt Sugar members Mikel Banks, Jason Di Matteo and andLewis Flip Barnes.  in the 90s. In 1999 he and Jared Nickerson formed Burnt Sugar which has, to date,  produced 16 albums under Tate’s direction on Burnt Sugar’s own Avant Groidd imprint.

Greg Tate was a Staff Writer at The Village Voice from 1987-2003. His writings on culture and politics have also been published in The New York Times, The Washington Post, Artforum, Rolling Stone, VIBE, Premiere, Essence, Suede, The Wire, One World, Downbeat, and JazzTimes. He was recently acknowledged by The Source magazine as one of the ‘Godfathers of Hiphop Journalism’ for his groundbreaking work on the genre’s social, political, economic and cultural implications in the period when most pundits considered it a fad.

His books include Everything But The Burden, What White People Are Taking From Black Culture (Harlem Moon/Random House, 2003), Midnight Lightning: Jimi Hendrix and The Black Experience (Acapella/Lawrence Hill, 2003); Flyboy In The Buttermilk, Essays on American Culture (Simon and Shuster, 1993). Next year Duke University Press will publish Flyboy 2:The Greg Tate Reader. He recently completed ‘The 100 Best Hiphop Lyrics’ for Penguin and is now working on a book about the Godfather of Soul, James Brown, for Riverhead Press.

His play My Darling Gremlin (with live music score by Lawrence Butch Morris) was produced at Aaron Davis Hall in 1993 and at The Kitchen in 1995. His short feature film Black Body Radiation was completed in 2006. He also collaborated on the librettoes for Juluis Hemphill’s opera Long Tongues (Apollo Production) and for Leroy Jenkins’ Fresh Faust, (Boston ICA Production).