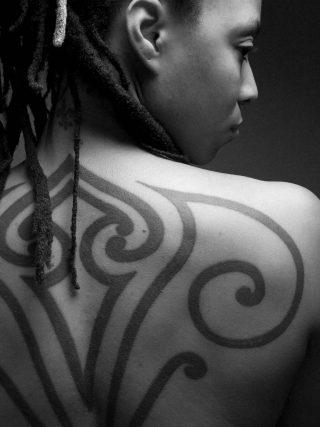 Mazz Swift, a native New Yorker, began play­ing the vio­lin at age 6, studying with Elis­a­beth Small, Shirley Givens and Tim­o­thy Baker. She grad­u­ated from the High School of the Per­form­ing Arts, dur­ing which time she made her solo pub­lic per­for­mance debut on the stage of New York’s Alice Tully Hall, per­form­ing along­side mem­bers of the New York Phil­har­monic Orches­tra. She later attended The Juil­liard School of Music, study­ing under Stephen Clapp, but left in the mid­dle of her 3rd year in order to pur­sue a more organic approach to music making.

Mazz’s diverse musi­cal inter­ests have led her in many direc­tions; from clas­si­cal to rock to tra­di­tional folk music from around the world (spe­cial­iz­ing in Irish music) to hip hop and most recently jazz (free and composed). Con­se­quently, she has recorded and per­formed with a wide vari­ety of artists includ­ing Whitney Houston, Perry Far­rell, Dee Snider, James “Blood” Ulmer, Vernon Reid and DJ Logic (The Yohimbe Broth­ers), William Parker, Butch Mor­ris, many artists from the Black Rock Coali­tion, Kanye West, Com­mon and Jay-Z.

Mazz’s current projects include solo performances under the name of MazzMuse and writing music for and playing in the string trio Hear in Now. She also spends much of her time in Budapest, making music with some of Hungary’s finest musicians in two projects: Budapest Bar and Fire + Fire (Gypsy Meets Black). She sits on the artistic board of Con Vivo (the Jersey City-based Chamber Music Society) and is also a proud performing member for that same organization. For more information on her whereabouts and goings on, please follow Mazz at www.MazzMuzik.com