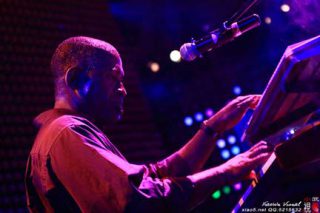 Musician, Composer, Bandleader and Music Educator, Bruce Mack is a native New Yorker, born in Brooklyn, raised in Harlem & the Bronx. His primary instruments are voice, electronic keyboards, and percussion.

Mack came unto the national music scene in 1985-86 leading the band PBR StreetGang with the release of indie-single ‘Chemical Pollution’, co-produced with friend and band-mate Ken Edmonds. It was released on the independent label Attic Sounds, which they founded and ran out of their apartments in Brooklyn & Hollis Queens. The record did very well on the college circuit and received tremendous support from the newly formed Black Rock Coalition (BRC). The sound was a nod to hip-hop, but most of the music created by PBR was very Punk-Funk-Alternative-Rock-R&B. Another recording by PBR titled “Didn’t Live Long” was featured on the BRC’s compilation ‘History Of Our Future’ on Rhino Records and another indie release on Attic Sounds (PBR Streetgang Live in Philly). In 1995, an indie label in Detroit (Zahmbee-Karlt Records) overseen by guitarist Jake Smith (Brothers From Another Planet) released a compilation CD titled ‘Detroit Underground’ which featured a PBR favorite “6:30″.

Mack has composed music for Thirteen/WNET New York MTV, Naked Angels Theatre, Risa Jaroslow Dance Company, filmmakers Gordon Skinner, Jeff Giles and the late Gerry Gonzalez. As president of the Black Rock Coalition for over 10 years, Mack co-produced 2 CDs for the BRC titled ‘Blacker Than That’ and ‘The Bronze Buckaroo Rides Again’. Following the lead of the organization’s founder, guitarist Vernon Reid, Mack made many contributions to the organization such as powerful tributes to Jimmy Castor, Jimi Hendrix, the Blaxploitation film era, and the connections of African-American, Latin artist and their music (The Afro-Latin Connection) in America at international and venues such as Brooklyn Academy of Music’s Majestic Theatre, Town Hall, CBGBs, and the now defunct Wetlands.

Aside being a creative performer, for over 20 years Mr. Mack has been a teaching model and instructor for organizations such as ArtsConnection, Henry Street Settlement, University Settlement, Hudson Repertory Dance Theater (New Jersey) and The Door – a multi-faceted youth services agency in New York City. Since 1999, Mack has been the resident teaching artist at P.S.3 The John Melsner School in the West Village, NY with an award-winning documentary film “When Fried Eggs Fly” (2006) about his work, produced by Constantine Limperis.