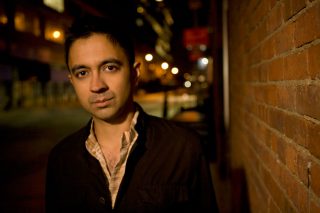 Dubbed one of the “new stars of jazz” by U.S. News and World Report, and one of “today’s most important pianists” by The New Yorker. Vijay Iyer is a NYC based pianist and composer.
The son of Indian immigrants, Vijay draws from African, Asian, and European musical lineages to create what The New York Times has called “bracingly expressionist jazz… full of pulsating blues.”
He has released three critically acclaimed compact discs as a bandleader. The most recent, Panoptic Modes (Red Giant Records) received a four-star rating in The Los Angeles Times and the French magazine, Jazzman. It was listed among the best jazz albums of 2001 by The New Yorker and The Village Voice. Jazziz hailed it as “an artistic triumph… one of the most exciting albums in recent years.”
Iyer’s collaborative trio with Aaron Stewart and Elliot Kavee, known collectively as Fieldwork, recently released its debut disc, Your Life Flashes (Pi Recordings), noted for its “vibrant playing and wondrous ideas” (The Boston Globe) and its “exploration of rhythm in an intimate and intensely purposeful dialogue” (Billboard). Iyer performs frequently in the New York area and tours internationally with the Vijay Iyer Quartet, Fieldwork, and Raw Materials; his duo project with saxophonist Rudresh Mahanthappa.
Iyer’s forthcoming evening-length project in collaboration with poet Mike Ladd will premiere at the New York Asia Society May 8-11, 2003.
As a sideman, he is currently a member of avant-garde pioneer Roscoe Mitchell’s nine-piece NoteFactory, legendary poet Amiri Baraka’s Blue Ark, as well as Burnt Sugar. He has also collaborated extensively with the renowned saxophonist and composer Steve Coleman on numerous world tours and on four of Coleman’s BMG recordings.
For his own projects, Iyer has received grants from the Rockefeller Foundation, New York State Council on the Arts, Arts International, Creative Capital, and the Mary Flagler Cary Charitable Trust. He also lectures and publishes on various topics, including improvisation, cognitive science, and jazz studies.