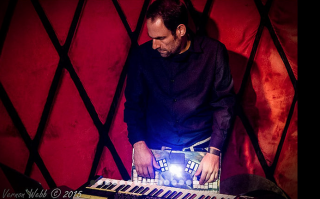 Leon Gruenbaum has been a vital force in the New York music scene for nearly 30 years. After early classical training on piano and clarinet, Mr. Gruenbaum developed an interest in jazz, funk and avant-garde music.

Mr. Gruenbaum conceived of the world’s first relativistic music keyboard, a patented MIDI controller called the Samchillian Tip Tip Tip Cheeepeeeee. He has recorded and performed internationally with this instrument with guitarist Vernon Reid (Living Colour), James Blood Ulmer and many others.

He also plays this keyboard while vocalizing in his most recent project, “Creative Apocalypse”.  He also recently led a band, “Genes and Machines”, which features – in addition to another vocalist/keyboardist – two drummers, one acoustic and one electronic.  Genes and Machines has performed at the Stone, BAMCafe, and regularly at Nublu.

In 2003-4 Mr. Gruenbaum was a visiting artist at Harvard University, where he led students in an “Interactive Anti-Fashion Show”