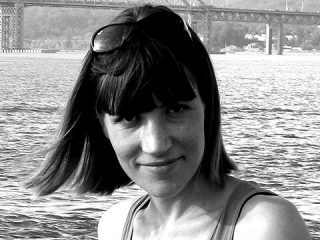 Meret Koehler (b. 1975, Zurich, Switzerland) began her creative endeavors by picking up the violin in her early childhood. Next to her serious dedication to music, she also studied ballet in Zurich. As a teenager she started playing the drumset after many years of wanting to do so. She took to her new instrument quickly and within a short time she found herself touring Switzerland with the jazz saxophonist Co Streiff. Also, she studied at the School of Audio Engineering in Zurich as well as working in a recording studio, and as a sound engineer for live performances.

Though she knew virtually no English at all, she came to New York at the age of 25, enrolled in the Drummer’s Collective School of Music and got her feet wet in the New York music scene, playing funk and R&B music in clubs such as the Village Underground, Cafe Wha? and 101.

As a visual artist, she has shown fine art painting works in group shows at MoCADA, Skylight Gallery and also several single and multi-channel video art works at Monkeytown.

She is currently enrolled as a graduate student in the MFA Computer Art department at SVA (School of Visual Arts) in New York. Her areas of study include video art, music composition, sound design, interactive media, web design, etc. She is now working on her thesis, which will take the form of a live solo performance integrating custom-made drums/percussion with responsive computer-based graphics and video.