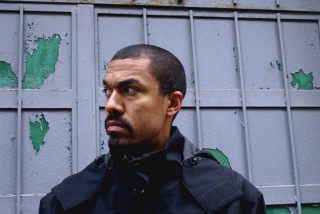 Born and raised in New Brighton, Minnesota on a steady diet of everything, he moved to New York in 1994. February 1999 saw the live debut of Earthdriver, of which Morgan was a principle member. His time with the band only lasted six months, but it was enough to garner a handful of gigs, an album, and a bit of attention.

In December of 1999 Morgan was tapped by Greg Tate again for Burnt Sugar.

In 2001 Morgan founded Circle Of Light Recordings as a means of releasing music when he wanted, how he wanted. The fist release was a solo electric guitar record called Adagio. Completely improvised from top to bottom, it set in motion his exploration of the concept known as Stunt Gutar². 2003 saw the second release of the label: Rough Americana. The dynamic duo of Morgan and DJ Mutamassik. Improvised and recorded live, the album sets a new standard for electronic music. Dealing in sounds from Memphis, U.S.A. to Memphis, Africa, this is the new hardcore grit-prov. Both releases available online through cdbaby.com.

He currently lives in Toscana, Italia.