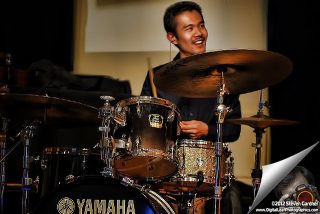 Hiroyuki Matsuura, also known as Matsu, was born into a musical family in Yokohama and raised in Tokyo, Japan. He started playing music in his infancy and then concentrated on the drums and percussion in his high school.  After only four years, Mr. Matsuura won the first prize of Dennis Chambers Drum Competition held by the Japanese drum magazine in 1995. Dennis Chambers (Santana, Tower of Power, Steely Dan) said, “ I am surprised that he is only 19 years old. We’d been saying that there was no great drummer in Japan, but we’ve finally found one!” While majoring in accounting in Chuo University, Tokyo, Japan, he began working as a professional musician. In 1999 as a member of Tama Band, he won the first prize and the
audience award at the Kichijoji Jazz Contest. He also received the second prize of the Japanese drum magazine drum competition in 2000 and his performance of the competition was on the CD of the magazine’s October issue. In Japan, he performed with many professional musicians, such as a major recording artist Tamaki Mori (Polydor Records), Shin Kazuhara (named “the best trumpeter” in the Japanese studio scene) and the Osaka Municipal Symphonic Band which was established in 1923 and now carries the longest history of any professional symphonic wind orchestra in Japan. In 2002 spring, Mr. Matsuura was a member of the R&B-Jazz-House band, urb, that had been approached for a contract with Sony Music Japan. However, since he longed for the New York City music scene, a community of musicians from all over the world, he decided to leave the band to pursue his musical study and career in NYC. (After he left the
band, the band signed a contract with Sony Jazz label and has released four CDs in Japan.) Mr. Matsuura moved to New York in September 2002. He attended the City College of New York and studied with distinguished professors and musicians, such as John Patitucci, Mike Holober, Neil Clark, Duduka da Fonseca, Adam Cruz, and Ed Simon. The City College gave him the following: the Edward Rensin Memorial Award, The Max E.Greenberg Scholarship, and Doris Field Award. He completed a BFA in jazz performance and was the only BFA music graduate in the class of February 2007 who received the highest honor, Summa Cum Laude. Mr. Matsuura continues his professional career as a musician and quickly established himself as one of the leading drummers in the US’s jazz, R&B and world music, theater music scene and is now one of the field’s most sought after performers.