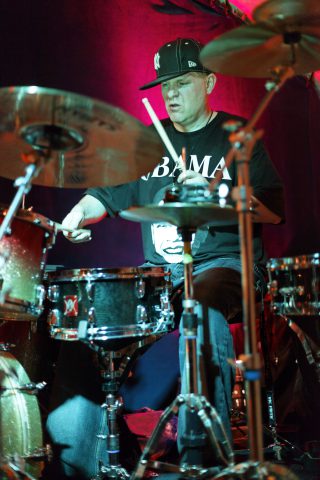 Swiss Chris has just finished a successful four years as the Music Director and Drummer for five time Grammy winner, John Legend, and is now building his own career with a forthcoming album to be released Internationally as well as finishing his book, Sticking With Swiss.  Swiss is also actively involved with his S.W.I.S.S. (Saving With Instruments, Samples and Soundz) Organization, dedicated to healing and educating people with musical instruments as well as to help in the spread of communication through music for betterment of the world.

During 2006-2008, for John’s “Once Again” album, Swiss contributed his talents and did 2 US tours, 2 European tours, and 1 Asian tour. With the release of John Legend’s “Get Lifted” album, Swiss played on 3 US tours, 3 European tours, 2 Australian tours and tours in New Zealand and Japan and worked with artists like Sir Elton John, Kanye West, Snoop Dogg, Common, Wyclef Jean, Miss Lauren Hill, DJ Dummy and DJ A-Trak.

While in the States, Swiss Chris earned his Bachelor’s Degree in Performance from the Berklee School of Music in Boston, Massachusetts. He further studied at the Drummer’s Collective in New York after gaining his paper at Dante Agostini in Switzerland (certificate in Contemporary Music). He received multiple awards and honors as a marching band field drummer, big band and contemporary jazz drummer as well as earning a humanitarian award from his homeland Switzerland.

He has been on BET in a featured performance as the musical director/drummer for the Ed Gordon Show with the Last Poets, Jessica Care Moore and Mums from the Hit HBO show OZ. Swiss performed and/or recorded with conscious MC’s like Mos Def, Dead Prez, Acrobatic, Afura and Milano.

Swiss was the musical director and house drummer for the legendary Lyricist Lounge. He worked for multiple fundraiser and charity events with the political activist group Earthdriver. He’s played at Madison Square Garden for a Mumia Abu Jamal Benefit (with a All-star cast).

He was also the musical director/drummer/programmer for Mexicano 777 (featuring KRS One and Mad Lion) and Bazaar Royal (MTV appearance). He toured Eastern and Western Europe with the legendary James ‘Blood’ Ulmer (Blues/Jazz). He performed at the Apollo Theater with Billy Cox (Jimmy Hendrix, Band of Gypsies) and Ladell Mclin, Jessica Care Moore and Imani Uzuri and Burnt Sugar.