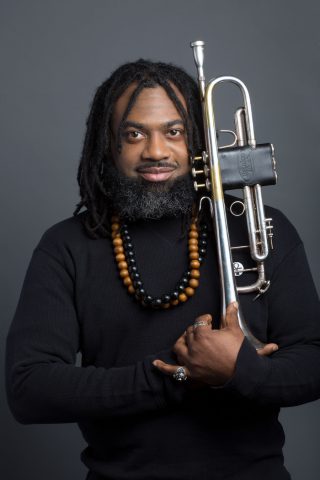 With a style and passion for music unmatched by any, JS Williams has established himself as one of this generation’s most eclectic artists. He combines every element of music he has been influenced by to create sonorities that resonate with each listener.

As a New York City native, Williams began honing his musical skills at Fiorello H. LaGuardia High School of Music & Art and the Performing Arts under renown educators Justin DiCioccio and Bob Stewart. Upon graduation, he perfected his gift for the trumpet at Howard University under accomplished trumpeter Fred Irby, III for a year. His education in trumpet performance was completed at The New School under the tutelage of Cecil Bridgewater, Reggie Workman, Jimmie Owens, Charles Tolliver, and Valery Ponomarev. Williams’ education in composition and arranging was refined at Queens College under acclaimed trumpeter/arranger Michael Philip Mossman.

JS Williams has been fortunate enough to perform at some of the world’s most famous venues to include: The BlueNote (New York City and Japan), Avery Fisher Hall (Lincoln Center), Bohemian Caverns, Blues Alley, Smalls, and Ginny’s Supper Club. He has graced the stage with a wide array of artists to include: Bilal, Gregory Porter, Cheryl Pepsii Riley, Winard Harper, Marc Cary and Living Colour.

Williams’ acumen for sight-reading and musical versatility has given him the opportunity to perform with The Revive Big Band, The Duke Ellington Orchestra, The New Ray Charles Orchestra, The Harlem Renaissance Orchestra, The Valery Ponomorev Big Band and The Chuck Brown horn section.

Trumpeter of the Year (2013)- tied with superb trumpeter Donvonte McCoy, Washington DC City Paper, Honorable Mention, John Lennon Songwriting Contest, and Honorable Mention, USA Songwriting Contest are a few of the awards JS Williams has been fortunate to receive in his career. Also, JS Williams’ debut recording, “The Late BLUEmer”, has garnered acclaim for its thought-provoking melodies, lush harmonies, and shines with a group of stellar, young musicians.

Aside from his work as a performing artist, JS Williams also conducts clinics around the country on improvisation, music history, and music theory. Most notably, as a faculty member of the renowned Litchfield Jazz Camp in Connecticut. His propensity for extending the oral tradition of music has garnered him praise from mentors and contemporaries alike.

JS Williams continues to study, educate, and perform music of various styles and genres around the world.